Róbert Berény was born in 1887 in Budapest. He was a prominent representative of the Hungarian avant-garde movement. Berény began his studies in 1904, at the Tivadar Zemplényi School of Decorative Arts. In 1905 he went to Paris and became a student of the Julian Academy. During his time there, Matisse's and Cezanne's art had a huge impact on Berény.

The artist studied and followed the contemporary art trends. He belonged to the group of Hungarian painters called "Vadak" (Hungarian painters who mainly studied in Paris under the impact of Fauvism in the first decade of the 20th century). After returning to Hungary, he often published  in “Nyugat” (Hungarian literary journal). His art at this point already carried the characteristics of expressionism and cubism.

In 1909 he became a member of the avant-garde group known as The Eight. Berény played an active part during the time of the Soviet Republic, and became the head of the painting department at the Art Directory.

He designed posters as well. His best-known poster, titled  "To arms! To arms!", was born at this time.

In addition to painting and poster design, his graphic work is also significant. In his graphics he mainly used red chalk, walnut stains, and diluted ink, making them unique. He did not care for reproduced graphics and the technique of reproduction.

In 1948 he was nominated professor of the College of Fine Arts.His works mostly consist of still-lives, nudes and portraits.

Most of his works can be found at the Hungarian National Gallery. He has numerous works at the Janus Pannonius Museum (Pécs), in the Deák Collection, in Székesfehérvár, and in private collections as well. 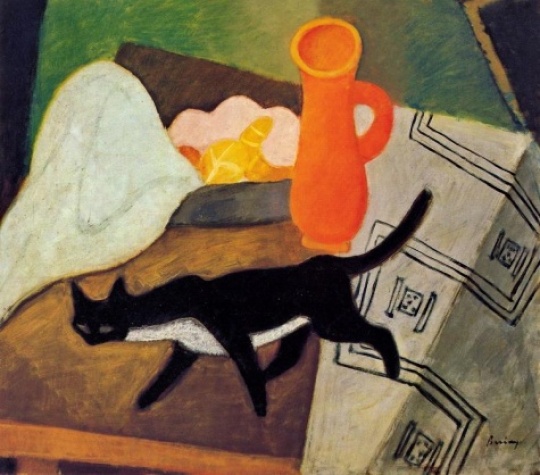