Aurél Bernáth was born in 1895 in Marcali, Hungary. Following Ödön Rippl-Rónai’s (József Rippl-Rónai's brother - famous representative of Art Nouveau in Hungary) advice, he started to focus on painting.  Bernáth continued his studies in Nagybánya, as a student of István Réti and János Thorma. In 1921, he moved to Vienna, where he started to paint in an expressionist, abstract style. He came into contact with Lajos Kassák and the activists. He lived in Vienna and Berlin until 1926.

From 1928 on, he exhibited regularly at the Műcsarnok and at the Ernst Museum. In the 1930's he returned to the traditions of the Nagybánya Painting School.

An impressionistic style based on Nagybáya's traditions became more and more characeristic of Bernáth's work.

In 1926 he became a member of the New Artists' Society. In the 1930's, he was the intellectual leader of the Gresham circle. In 1945 he started teaching at the Hungarian Academy of Fine Arts. From 1930 he was a regular visitor of the Szolnok Artists' Colony. In the 1940's, the lyrical atmosphere of Bernáth's paintings shifted towards colder shades and  a more rigid imagery.

In addition to Bernáth's paintings, his murals and works as an author and graphic are also significant. He was a painter of exceptional individuality, and a representative of the classical style. In his hometown (Marcali) the Aurél Bernáth Gallery was opened, in recognition of his work. In 1995, the Aurél Bernáth Society was established in Budapest; it aims to cultivate the memory of the painter, and to organize exhibitions. 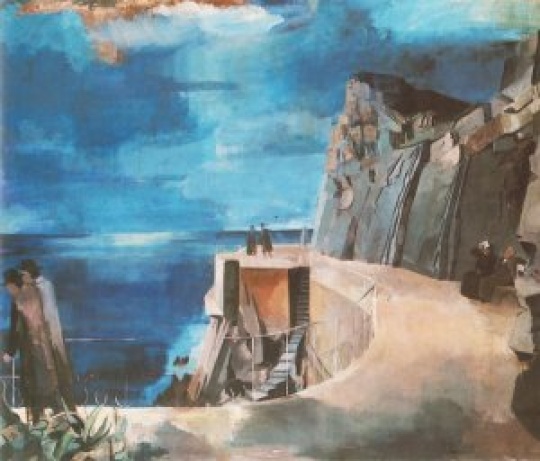