Kornél Sámuel was born in 1883 in Szilágykövesd (village in Romania). In the Hungarian School of Applied Arts in Budapest he was the sculptor student of György Lajos Mátrai. From 1905 he studied from Balthasar Schmitt at the Munich Academy of Fine Arts, and at the same time he was also working at the Nymphenburg porcelain factory. In 1908 he returned home and he worked at the studio of Ede Telcs. In 1911 he took a study trip to Italy. Following the outbreak of the First World War he was called to the front, where he died at the beginning of fighting.

With his simplified realism patterned sculptures he early aroused the attention (Fortuna, Eve, Love). He appeared first on the spring exhibition with his two works in 1909, and the first appearance of the twenty-six-year-old artist, arouse the both the audience and his friend's attention with his portrait study, but especially with his female nude statue he caused sensation and shown, that a craft-savvy and rich - inner emotions showing - artist appeared. In the winter of 1911 he went to Florence for a long study tour, where he met the early Renaissance fine naturalism and the form world of Michelangelo, this result he prepared one of his major works, the David. 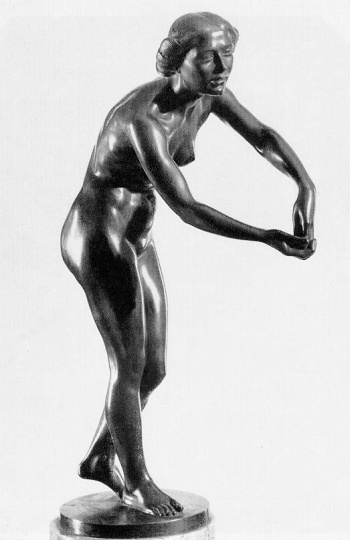