Sen. Károly Markó was born in 1793 in Lőcse (city in Slovakia). He had already wanted to be painter since his youth, but it happened differently at the beginning of his career. In the early 1800s he studied engineering in Pest and in Kolozsvár (city in Romania). Between 1812 and 1818 he worked as an engineer in Lulbó and Rozsnyó (both are towns in Slovakia). In Rozsnyó he painted his first pictures, which were duplication of Joseph Fischer paintings. In 1818 he arrived to Pest, where he required developing his drawing skills. In 1822 he travelled to Vienna and he became the member of the Academy of Fine Arts, where he specialized on historical and landscape painting. From 1826 he lived in Kismaros (village in Pest County), than from 1830 he had been living on the Eszterházy holding. In 1832 he made an Italian tour, he went to Rome, Florence, Venice and Bologna. Between 1843 and 1848 he also travelled, than he settled in Florence. In this time he has been already known painter throughout Europe.

In 1840 it was an exhibition of his works, on the first Art Exhibition in Pest. In the same year he was elected member of the Hungarian Academy of Sciences. His works can be found in several museums in Austria, Czech Republic, Denmark, Germany, Hungary, Italy and in Slovakia.

His paintings from the years of 1810 are mainly copies, but he had already made own works with the gouache technique (one type of watercolor paint). Sen. Károly Markó name became famous in the Hungarian art history as the creator of landscape painting. His art is built on the 17th and 18th century historical epic's painting. His landscapes represent idyllic atmosphere and classical culture. 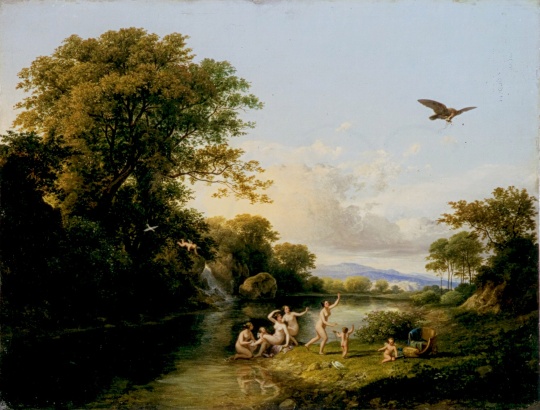