József Rippl-Rónai was born in 1861 in Kaposvár (city in South West Hungary). He began his career as a chemist assistant; he got pharmaceutical master diploma in Budapest. He was teacher in Zichy Ödön’s home in 1882, but in this time he took private drawing lessons. At his age of 23 he started his art studies at the Munich Academy in 1884. He was student of the Diez and Herterich ‘live-model’ class for three years. In 1887 he traveled to Paris by the Scholarship of the Hungarian State, where he became the assistant of Mihály Munkácsy, while he met the pursuit of innovative style as well. He lived for two years from the copying of Munkácsy’s works. In 1892 he moved to Neuilly, here he appeared first with single exhibition at the Austro-Hungarian embassy in Paris.

Several times he organized solo exhibitions in Budapest. In 1895 in a private dwelling he showed 30 works. He exhibited 203 works in the Royal Hotel in 1900, than his 328 paintings were shown in the Mercur Palace in 1902, and his 318 pictures in the Kálmán Könyves publisher in 1906. In the same year he was greeted by the success. In the Hungarian art an unprecedented audience success, a huge image shopping fever started. He became a leading figure of the Budapest’s artist, and the new foundation, the Hungarian Impressionists and Naturalists Circle elected him to a member. He rented a studio in Buda and he began organizing the arts and crafts company, the “Workshop”.

In 1908 he bought the “Roman Villa” on the edge of Kaposvár, where he lived and worked. In 1912 he prepared the large glass window of the Ernst Museum.

He touted as the best Hungarian representative of the post-Impressionist and secessionist aspirations. For his art the rich colors and stylized lines are characteristic. On his works he presents the small town life, the best examples of it the series about Piacsek uncle. He created a very special decorative style what he called "corn style", the paint with the fluffy, mottled effect was applied on the canvas (this style is most comparable to the pointillism). In his late era he painted dramatic writer portraits and self-portraits. 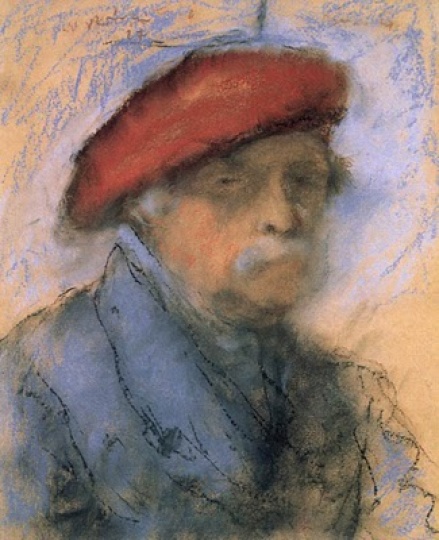