Pál Szinyei Merse was born in 1845 in Szinyeújfalu (village in Slovakia). The painter came from a noble family, the father supported his son’s artistic ambitions, and his mother was literature and music lovers. From 1856 he studied in Eperjes (a Slovakian city), and from 1863 in Oradea (city in Romania), where he graduated. Szinyei during his gymnasium years began to deal with painting seriously. His first teacher was Lajos Mezey from Oradea. In 1864 he enrolled into the Academy of Fine Arts in Munich, where one year later he started to study at the class of Hermann Anschütz. After he studied painting from Sándor Wagner. For 1866 he had made significant friends with Wilhelm Liebl (1844–1900), Hans Makart (1840-84) and Gabriel Max (1840-1915). With his “Removal of the hanged” titled painting, after three and a half years study, in October 1867 he was admitted to Karl von Piloty’s class.

The international exhibition opens in Munich in 1869, where the painter meets with the French painter Gustave Courbet, and became his interpreter. The exhibition was a great influence on him so in 1869 he left the Academy. From 1870 he was living in Munich, and as an independent master, works for market. In 1873 he prepared one of his best known paintings, the Picnic. In the subsequent years, the economic affairs of the estate of his father was seized him and he almost completely turned away from painting. Between 1894 and 1895 on the Fine Art Society organized exhibition he had a great success with his pictures. From that time, the painting became the most important part of his life. In 1901 his “Picnic” titled picture won gold medal in the Munich exhibition, and some of his works has also been presented in Venice. In the same year he made a tour in southern Italy.

In 1905 his first solo exhibition was held at the National Salon (Modern Hungarian artists), where his 89 works were presented. He was appointed director of the National Decorative Drawing and Art Teacher Training School (From 1908 College of Fine Arts). In 1907 he was a founding member of the Hungarian Impressionists and Naturalists' Circle. In February 1910, on the Berlin Secession Hungarian exhibition 20 of his paintings hit great success, than in April, the Galerie Heinemannban in Munich presented solo exhibition from his 31 works. In May he received a gold medal at the Berlin International Exhibition. In 1911, on the Rome International World Exhibition his 19 art works featured in a separate room, and he also received the Grand Prix there. In 1912, the second collection exhibition was organized by Ernst with his 96 works. For the highest award of the artist in 1914, the Hungarian Museum of Fine Arts has created Szinyei room. 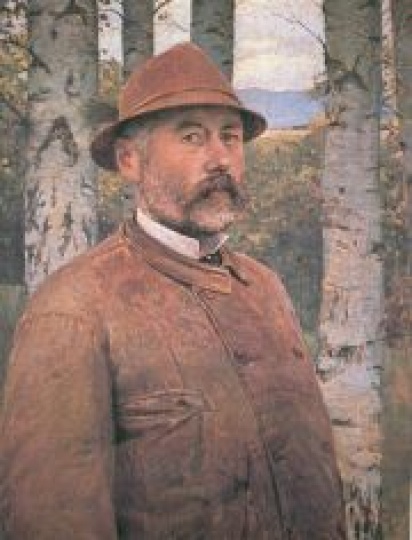