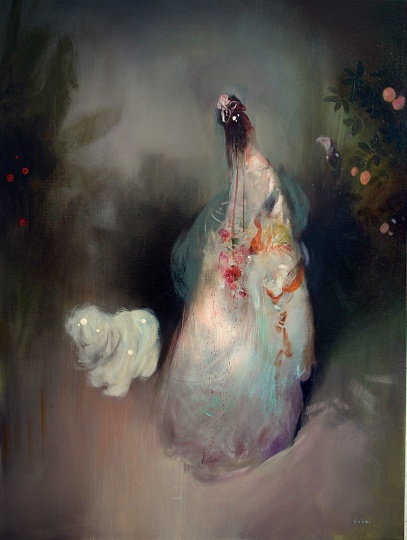 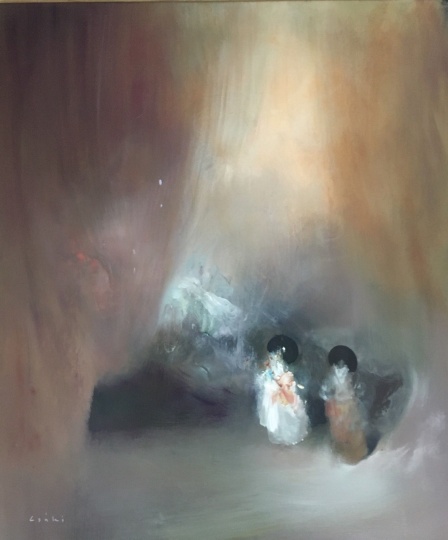 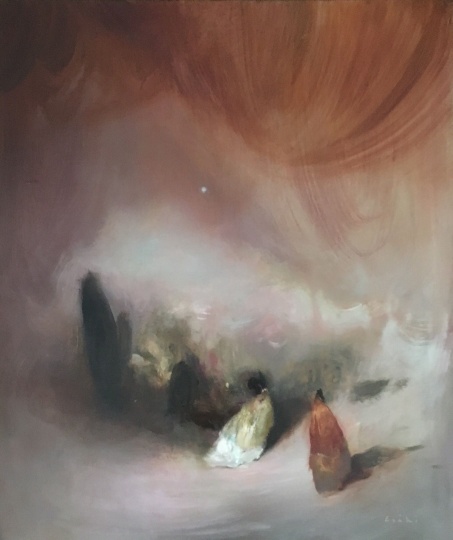 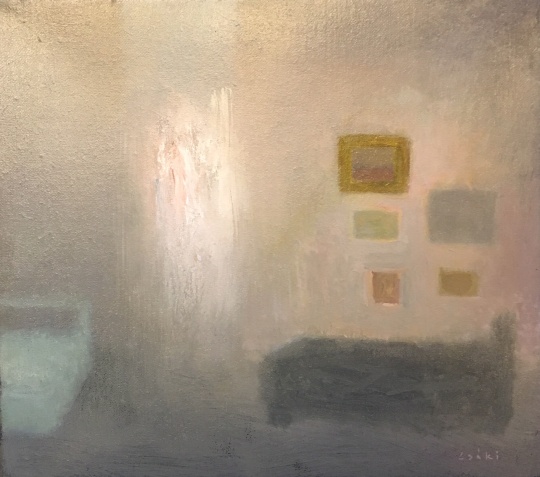 The dream of the collector 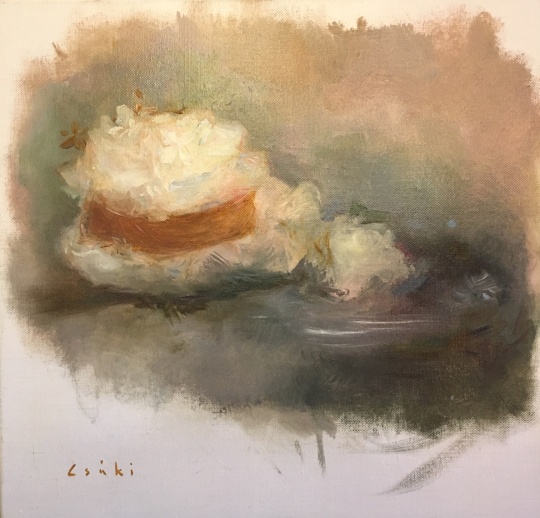 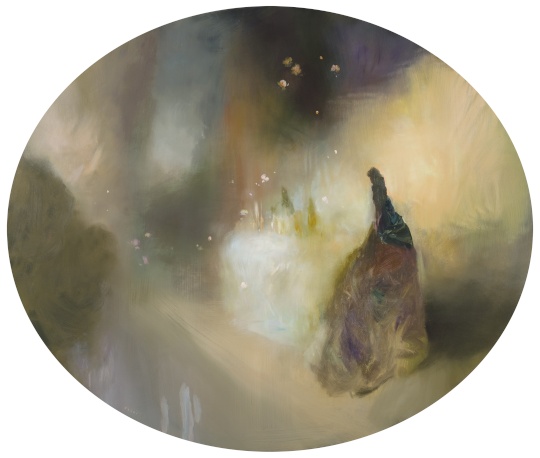 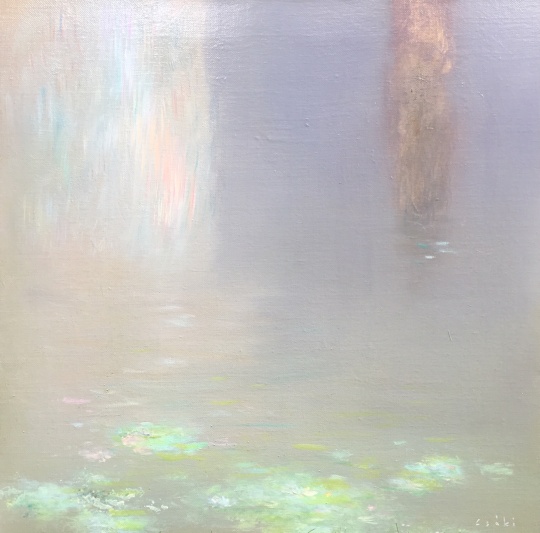 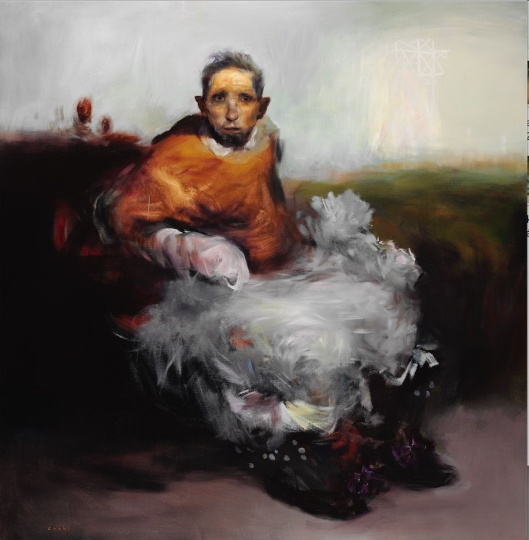 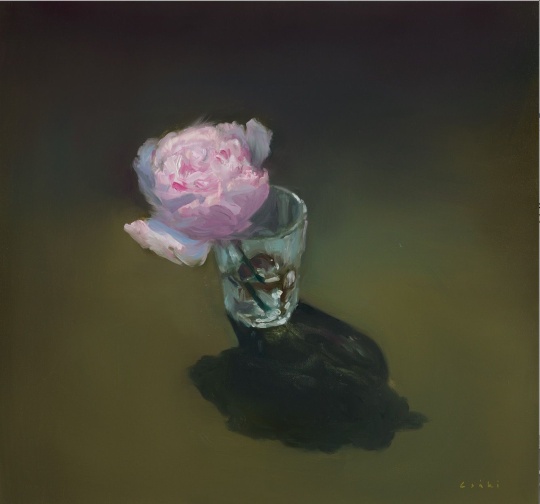 Rose in half glass 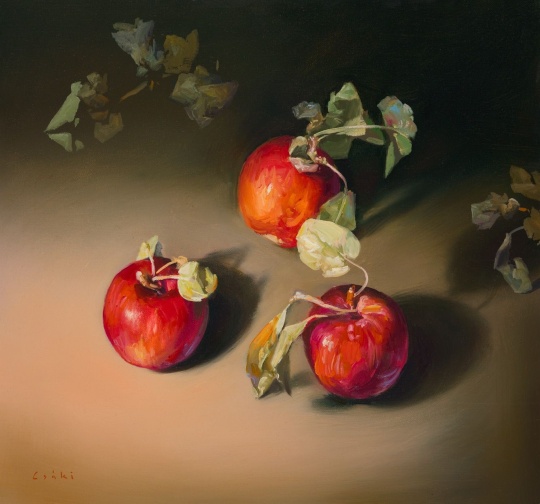 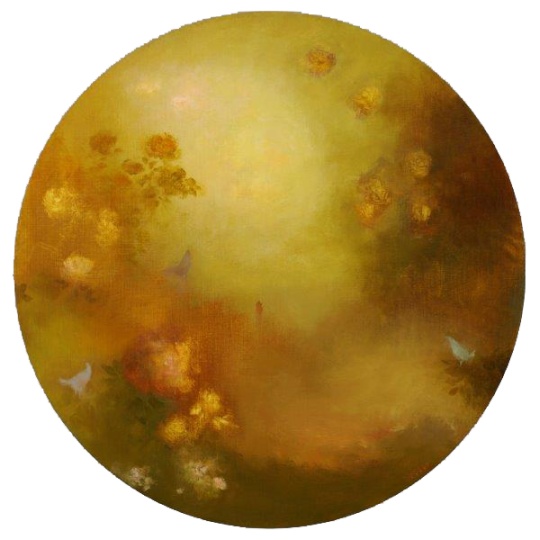 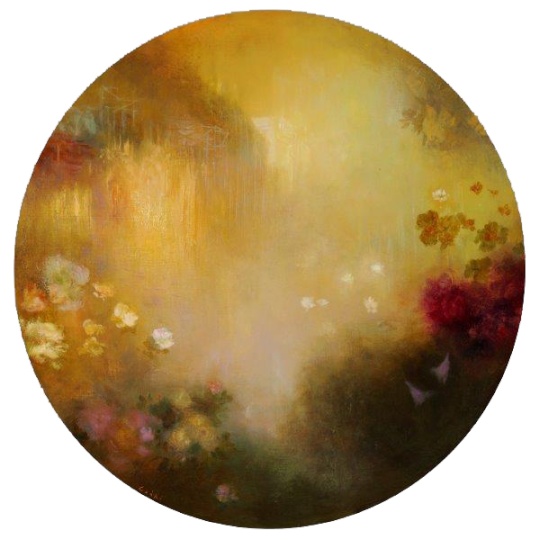 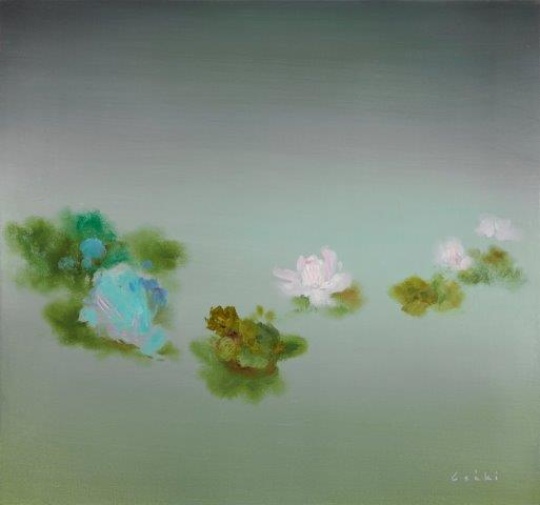 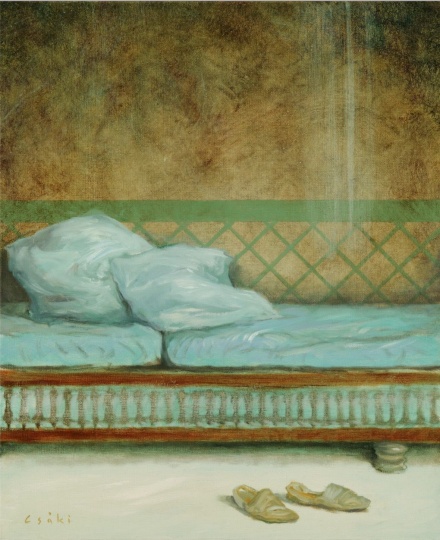 Róbert Csáki was born on January 13th, 1964 in Budapest. He attended the school for applied arts until 1983. Three years later he was accepted to the Hungarian Academy of Fine Arts, where he started out as a graphical arts major and finished his studies as a painter. His teachers were Gábor Dienes, who had a major influence on Csáki, and Tamás Felsman. After having finished his studies in 1990, he participated in a masterclass until 1993. For a short period he worked as a teaching assistant at the Hungarian Academy of Fine Arts. In 1996 he made an educational trip with the painter Gábor Nagy to the Netherlands, where he often returned later. Csáki mainly uses oilpainting in his works, but also creates graphics and sculptures at times. His early works were already characterized by a very unique world of colors and shapes, and a special way of using the paintbrush.
Róbert Csáki’s paintings reflect that despite our efforts, we are far from being perfect. His imagery pushes the limits not only in the moral sense of the viewer's personal identity, but also in the broader sense of living environment and surroundings. In Csáki’s paintings reality is combined with the surreal, the unnatural; the clearly visible is mixed with the apparent. This inherently grotesque world is filled with distorted faces, bizarre and blurred figures, utopistic cities and otherwordly landscapes. In Csáki's creatures hover around the houses that seem to bend onto one another, while  forms and figures nearly disappear in the fog.
In this complex, multilayered world there are no fixed boundaries, everything is fantastical. Real faces disappear, things lose their original properties, beauty becomes ugly, while ugliness is disguised and appears as beauty. Csáki's vulnerable protagonist becomes a lonely outcast living in their own shell, surrounded by an unfriendly world. They retreat into their inner world as a way of self defense. Csáki's protagonists challange the viewer's preconcieved prejudices and views connected to specific concepts - such as beauty and uglyness - with surprising grotesqueness. 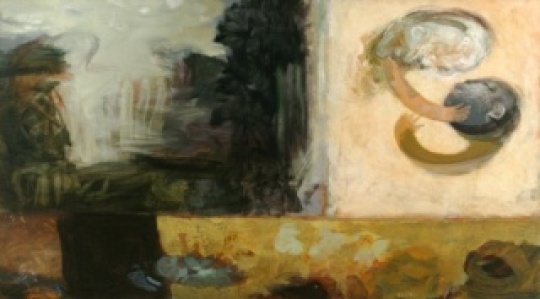 Il will be night soon 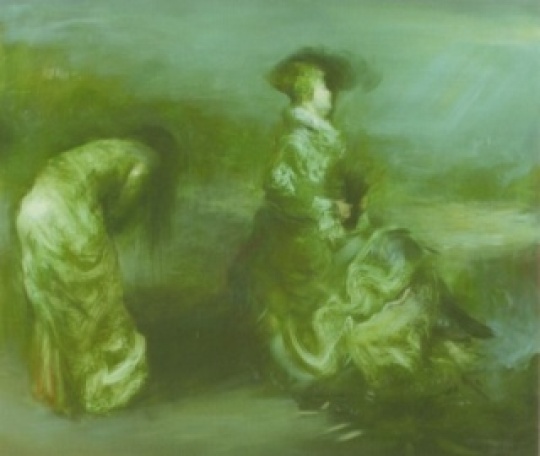 Winter on the Island of Cythere - Hommage a Watteau 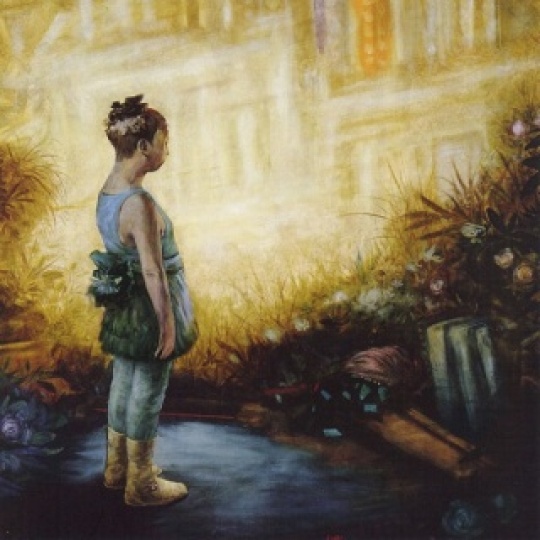 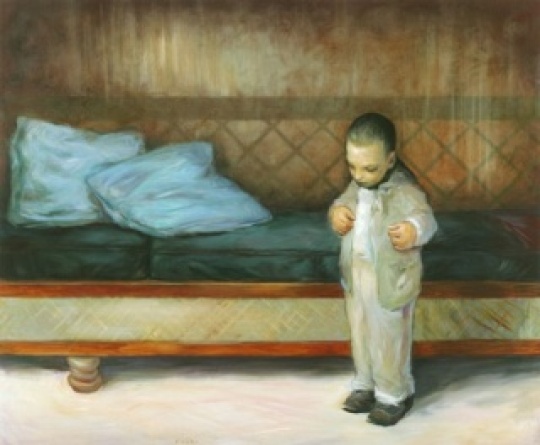 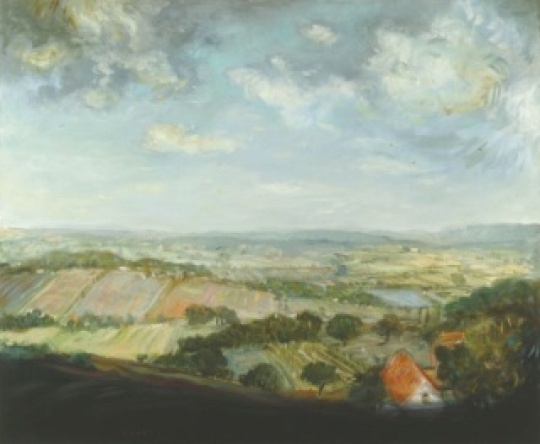 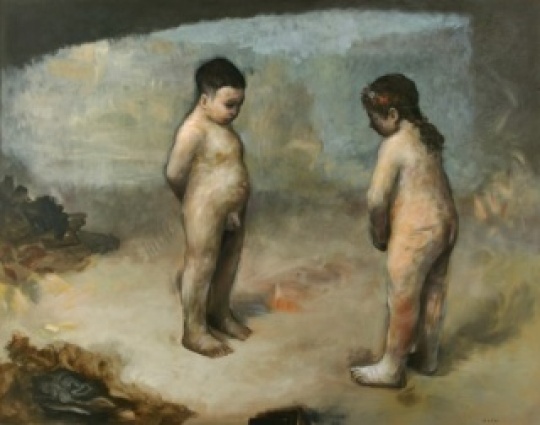 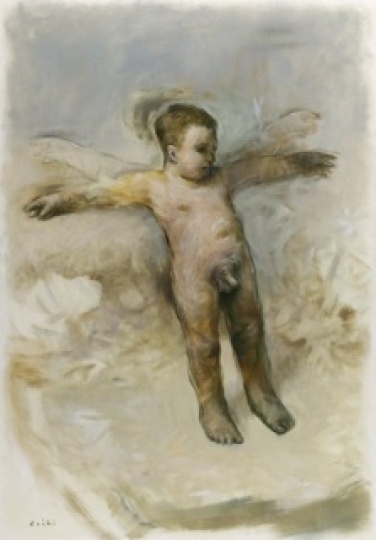 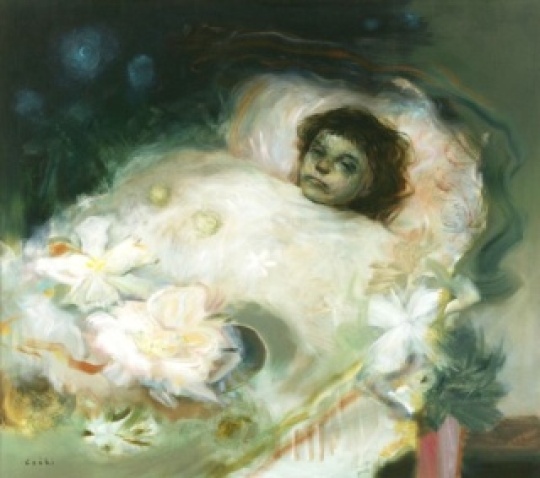 Foreigners in the big city - Moses 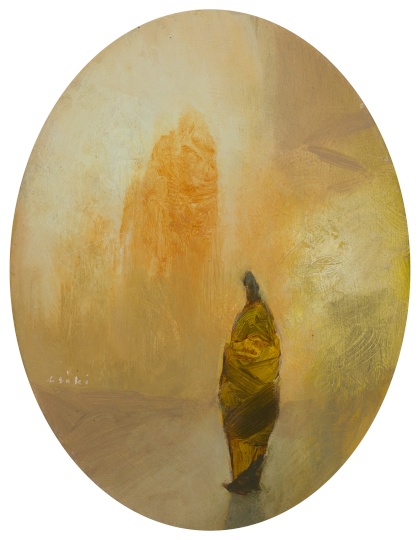