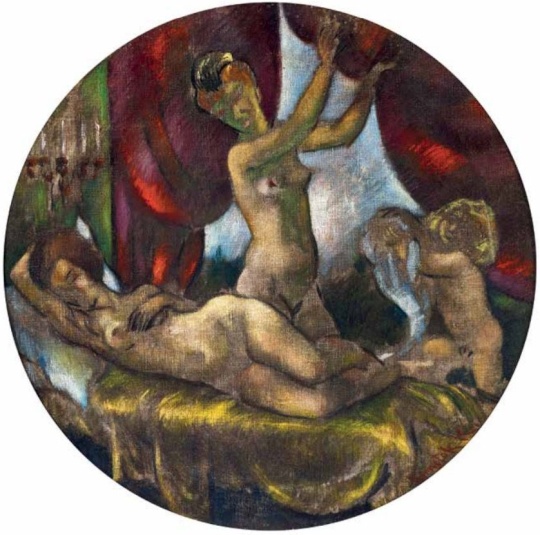 He was a leader of the "Neos", a group of artists with radical artistic views, working against the naturalism of the Nagybánya Artist's Colony (Fellow "Neo" artists included Béla Czóbel, Béla Iványi Grünwald, Vilmos Perlrott-Csaba, Lajos Tihanyi and Sándor Ziffer). Some had studied briefly at Nagybánya, but they were influenced by the French painters, particularly Paul Cézanne and Henri Matisse. In 1906 Kernstok left Hungary for Paris, where he was impressed by the style of Henri Matisse. After his return, he influenced development of the painters called The Eight (1909–1912, who included Tihanyi, Róbert Berény, Dezső Czigány, Béla Czóbel, Ödön Márffy, Deszső Orbán, and Bertalan Pór. The sculptors Márk Vedres and Vilmos Fémes Beck were also associated with them). The Eight embraced the radical intellectual movements in the early 20th century, which was reflected in Budapest in both literature and music. They worked with such writers and composers included Endre Ady and Béla Bartók. They worked with the rationalism of cubists, the decorative use of strong color as seen in the Fauves, and the emotional depth of German Expressionism. After the fall in 1919 of the brief Hungarian Democratic Republic, Kernstok emigrated to Berlin. In the last period of his life, Kernstok became interested in Etruscan painting. He may also have seen works by the painter Pablo Picasso, who was also exploring Etruscan and classical monumentalism. Kernstok's graphic works, together with his copper engravings, are also considered significant. Most of his artwork are exhibited in the Hungarian National Gallery also saved in private collections.